Simple Minds are one of those bands that can’t be easily labelled with a single music genre. This is, perhaps, hardly surprising considering the fact that the band were formed and came to prominence during the late 70’s and early 80’s; a time of rapid change in UK popular musical style. Perceived by one of this review’s photographer/writers as a guitar band with a generous helping of synth, and opposite way around by the other, it was with eager anticipation that we arrived with cameras and notebooks to witness for the first time the live performance of a band whose music we had enjoyed from its early years.

This performance was part of the band’s Big Music 2015 tour, following the release last year of their album of the same name. 21st April 2015, a sell-out crowd attended the Cambridge Corn Exchange, a wonderful old building in the heart of the university city. One of the venue staff had told us that the show would start at 8pm, with the band taking a ten minute break at 9.07, before returning for another hour set, followed by an encore. It all sounded very precise and organised, which is exactly how is was, with the exception of a minor hiccough, which we’ll mention later!

The show commenced with Let the Day Begin, a track from the 1991 album Real Life, followed by Blindfolded, from the latest Big Music album, and one of the band’s biggest hits, the powerful 1993 track Glittering Prize. Early 80’s Dance Track I Travel followed, before a wonderful acoustic set slowed the pace down a little. Those who knew little of the band must have already realised just how wide and varied a musical experience this was going to be, but it was clear that we were in the company of a knowledgeable and enthusiast crowd of real Simple Minds fans, who’s vocal accompaniment was audible throughout, even above some of the lesser known songs.

Back to the concert and another new track, Honest Town from the Big Music album featuring Catherine AD on vocals. The lightshow, highly impressive throughout, turned scarlet for Love Song and blue during Dolphins couple of tracks later, with gold lights radiating through the Big Music logos fronting the raised areas of the stage.

The first half performance reached a powerful crescendo with two of Simple Minds’ iconic 80’s tracks; the instantly recognisable Waterfront, and Don’t You from the soundtrack of the ‘85 film Breakfast Club; both songs enthusiastically accompanied by the audience. According to Jim Kerr, we had so far enjoyed a ‘warm up’. “We haven’t even taken our jackets off,” joked Kerr, before taking a short and well earned ten minute break.

White Hot Day, Book of Brilliant Things and East at Easter, a trio of tracks from the double platinum 1984 album Sparkle in the Rain kicked off the second half of the show. Jumping ahead two years to the title track All The Things, before a brief 90’s interlude with Let There be Love, returning to the 1982 New Gold Dream single Someone Somewhere. Two tracks from Simple Minds’ current album followed; Midnight Walking preceding the title track, Big Music, before rounding off with Sanctify, one of the band’s most distinctive hits. For the encore, which featured both female band members, the band chose Spirited Away from Big Music before performing a fabulous cover of The Doors’ Riders on the Storm.

It’s always fun to guess what the final song will be, unless, like us, you’ve already seen the set list! The rest of the audience may have noted an absence of tracks from the No1 selling Ballad of The Streets EP, but must surely have correctly deduced that Alive and Kicking would conclude the show. A track enthusiastically greeted twice by the audience after a unintended restart – “I f*cked up!” joked Kerr! But apart from this amusing slipup Jim Kerr’s front man performance was immaculate, his 2015 vocal performance indistinguishable from the band’s earlier years. He leapt around like it was still 1985, with a huge stage presence. Lead singers usually provide the strongest connection between a band and their audience, and this is particularly true of Simple Minds. Kerr is in a class of his own in this respect; controlling and encouraging the crowd with claps and characteristic arm gestures, connecting with the audience in all parts of the venue, inviting participation with a regularly extended microphone.

Let us conclude by returning to that musical genre question. Rock, electro, new wave, new romantic, synth pop? The music of Simple Minds is a fusion of these varying styles, and many more, producing a wide range of sounds in a style which is instantly recognisable. Whilst many of the earlier and more famous tracks contain musical elements of their time, the blending of those varied and distinctive styles ensure that each song is always identifiable as a Simple Minds product. That blend of styles produces a timeless quality to the music of Simple Minds and their live performance is polished yet retains a certain edge, which made the entire performance highly engaging to witness. Simple Minds served up something special, a showcase of their musical history, and a presentation of their current sound, which shows without any doubt that they are a band very much alive and kicking.

Book of Brilliant Things/East at Easter

Once Upon a Time

Let There Be Love

Let it All Come Down

Riders on the Storm 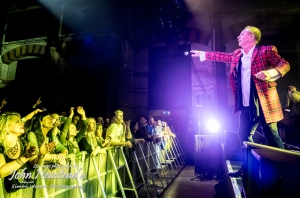 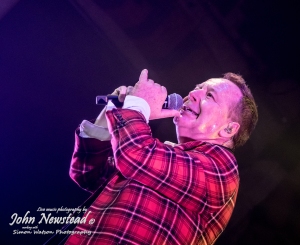 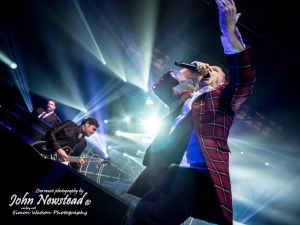 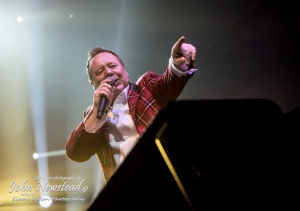 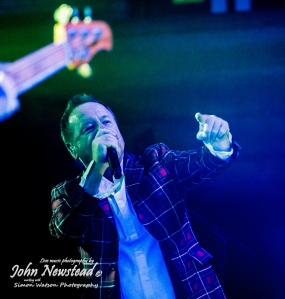 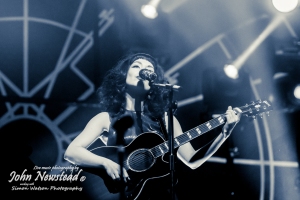